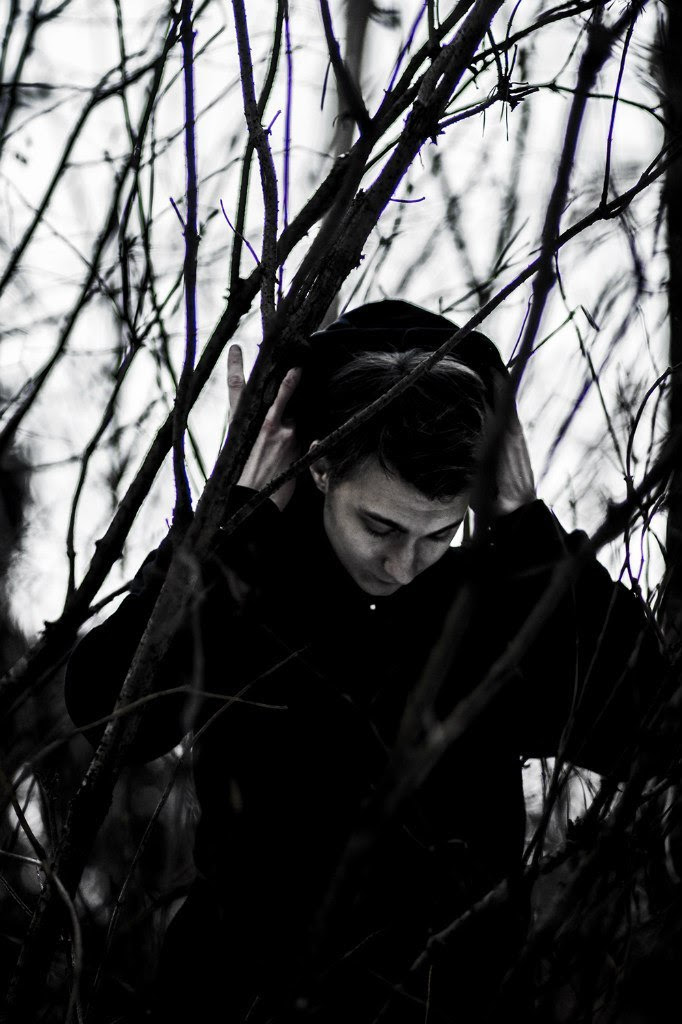 Songwriter, illustrator, musician Anton Yeroma comes from Minsk and we wanna introduce you his world and solo project called Difleger.

LFdM: First of all I wanna thank you for your disponibility.
I got to listen your music and I was fascinated .
It seems the images (like the images that you made) become music, could you tell us something about that?
AY: I found  tranquillity in songwriting, it is a kind meditation,it helps me concentrate on something deeper and more important to me.

LFdM: Can you talk about " Dreamcatcher " ?
AY: Dreamcatcher - Catch your dreams in a sleep and try to remember and turn them into reality.

LFdM: I think your music is very related to the creation of extreme contrast situations: you suddenly change from a quiet part into a blasting black-like sequence and back into a softer part.
Your music is not accessible, it's not melodic but it's certainly creative and unique
What kind of role does religion play for you and for your art?
AY: I believe in something above us and majority of different worlds.

LFdM: Have you ever thought to get in your hands the secret for the perfect melodies ?
AY: My melodies come to my mind from another reality.

LFdM: Are you a perfectionist?
AY: Just a little bit..

LFdM: What other projects are you currently working on or plan to be working on?
AY: I play in sludge band from Minsk Roddone (internet project) with ex-members Anna Coralie, since 2012.
I am planning to release an album (Difleger) in the end of this year.

Thank you very much .
Interview by Michela 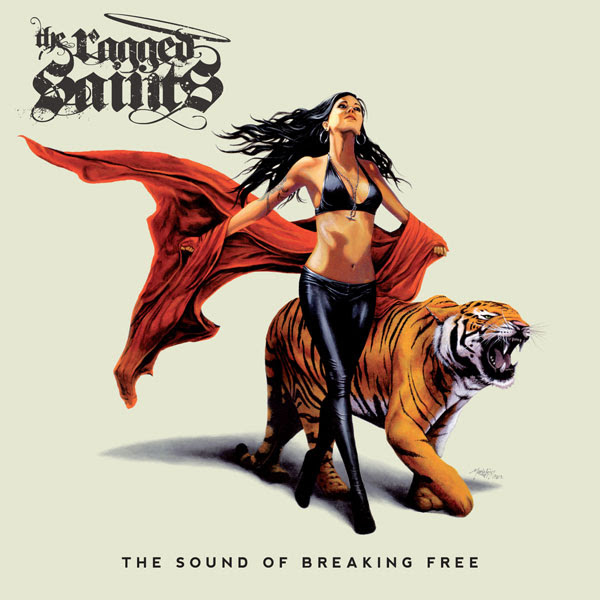 They come from Helsinki (Finland) and they are a pure finnish hardrock band!
Tomi Julkunen gives us a funny interview!

Hi man! Thank you so much for this little chat. As I told you, we want to share new music in our country or we try...
So, you come from Finland, land of music, lakes and...beautiful people!

RS: Yes, we do come from Helsinki, Finland, the land of hard and heavy music.  There sure are loads of beautiful women around here. Can’t really complain, especially in the spring and summer.

LFdM: Well "The Ragged Saints" an unusual name for a band, how did you come up with it?

RS: Me and Toni (the other guitarist and founding member) were trying to come up with something cool and of course somewhat original, meaning that no one else had used that name before. We both liked the word Saint. I came up with the name The Ragged Saints, it just hit me while I was in the shower one morning. Out of all places of course, shower is where all the best ideas come up hah. I checked right away if someone else was using it but nope, no one had so that’s how we decided the name the band. It turned out that there used to be this hobo long time ago and they called him The Ragged Saint after he died or something like that. He’s the saint for homeless, rejects and so on.

LFdM: Your band comes from '80s Melodic Hard Rock. What do you think about the modern Melodic hard Rock scene?

RS: There seem to be a lot of 80’s influenced hard rock bands at the moment, and even more AOR band with lot of keyboards. Some of the bands are really good, but most are just copying 80’s band without even trying to come up with something original. It great to have those cool influences but every band should still have something else too, not just cheap copies of past hits.

LFdM: The music in "The Sound Of Breaking Free" created a good mixing between modern and old school sound. Could you tell me something about this album?

RS: It really wasn’t even supposed to be full album. We just wanted to record couple of songs for fun and put it in the internet as free streams. The music just kept coming so eventually we decided to record whole album. No pressure or anything like that. It’s cool that now people seem to think that it’s a bit of a breath of fresh air. It’s definitely not over produced in any way. We’re really happy how it turned out, and that’s what matters the most.

LFdM: Where does the inspiration to write your music come from?

RS: I don’t know as it’s really hard to explain. I just pick up my guitar and start to play. Sometimes something new just pops out. I’m trying to record most of the ideas, then listen to those riffs and ideas after couple of weeks and then decide if there’s something we could use.

LFdM: What albums inspired your interest in production and songwriting?

RS: Just to mention few I’d say Whitesnake’s 1987 and Good To Be Bad, Def Lepperd’s Pyromania and Hysteria, Ratt’s Reach For The Sky. Those were influential in song writing but not really sound wise as most of those albums tend to sound really 80’s with huge drum sounds and effected guitars. We were not trying to have that certain 80’s sound on”The Sound Of Breaking Free”. We also didn’t want to sound like any modern band with wall of guitars and all that.

LFdM: There is also a good deal of variation vocally on this effort. Who write the lyrics and music inside the band?

LFdM: Are Whitesnakes a real guide and influence for your approach in music?

RS: I wouldn’t exactly call them a guide but yes, Whitesnake is one of the biggest influences definitely. The idea for The Ragged Saints was kind of born after my other band The Milestones was supporting Whitesnake in Helsinki and Toni was our guitar tech for that show.

LFdM: Though you are at the beginning, what has been your best concert experience at the moment?

RS: It’s really hard to pick just one as it seems that with every show we’re getting better and more comfortable with everything that happens on a live situation and how we come across live. Supporting Reckless Love was cool in a sense that the venue was packed. Personally I prefer bigger places and bigger audiences to smaller venues. I’d say other guys agree with me on that. Of course we enjoy every show we play but if I had to choose I would choose large venues with shitload of people.

Thanks a lot,
LFdM
Interview by Michela

"The Sound Of Breaking Free"
Tracklist: 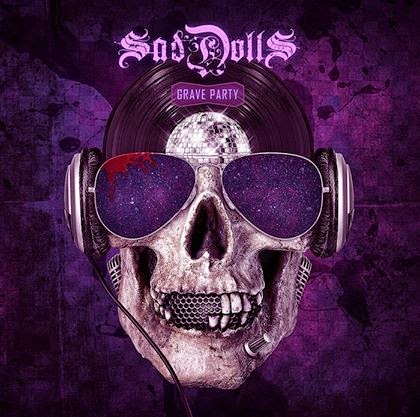 The Perversion of Dionysus

Always been considered as the one who brought fruits to maturity , Dionysus is also the god of intoxication, ecstasy and urge . With this third album, the Greek SadDoLLs have finally reached their natural musical metamorphosis .
Grave Party is the development of nearly a decade of music, which undoubtedly makes homage to their idols  while strengthening its artistic identity .
The balancing act between darkwave and industrial electronics is imposed with force and violence on almost all of the twelve tracks without ever losing intensity , reaching in some cases vertiginous peaks . The considerable use of synths intersect with harsh guitar riffs and the powerful punch of the battery.
In pure techno style , the opener " Rave To The Grave" immediately leave the place to the first single "Lady Cry" , that live is truly captivating , almost as the aesthetic impact of the video.
In a crescendo of sounds "Terminate Me," " Bleed Sister Bleed" and " Suicide Girl " combinate the most romantic aura of the band with the most carnal and earthly one . The album continues with the wonderful "Last Valentine" where the persuasive voice of the leader George echoes the sighs of Joanna David .
The atmosphere get back to dark and the angels of "Angels" unfold their wings towards eternity and then fall to the ground in an ecstasy without end  with"Sexy And Undead ."
If Happy Deathday (2012) has kept you company in the lonely nights making you pay even a few tears , Grave Party will have the ability to creep inside you,  freeing the most sacrilegious parts of your soul.