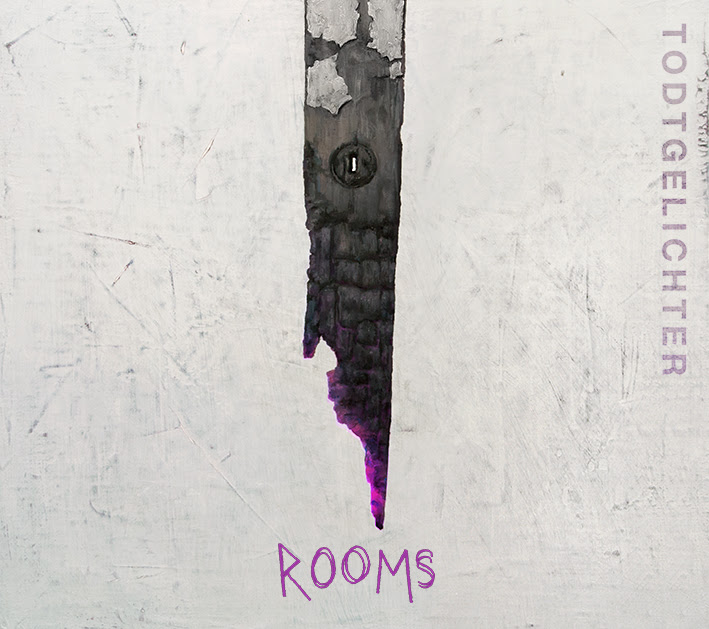 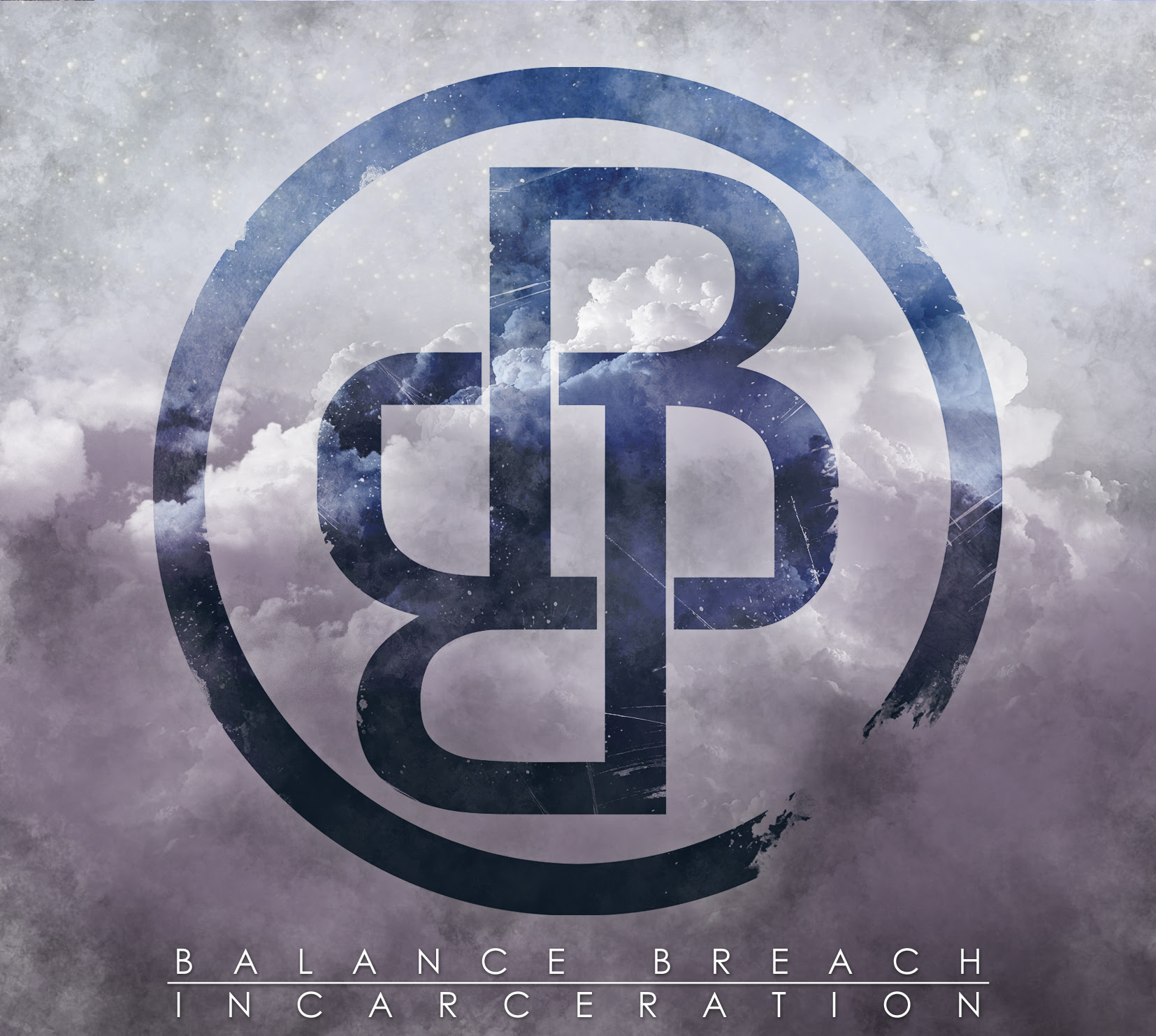 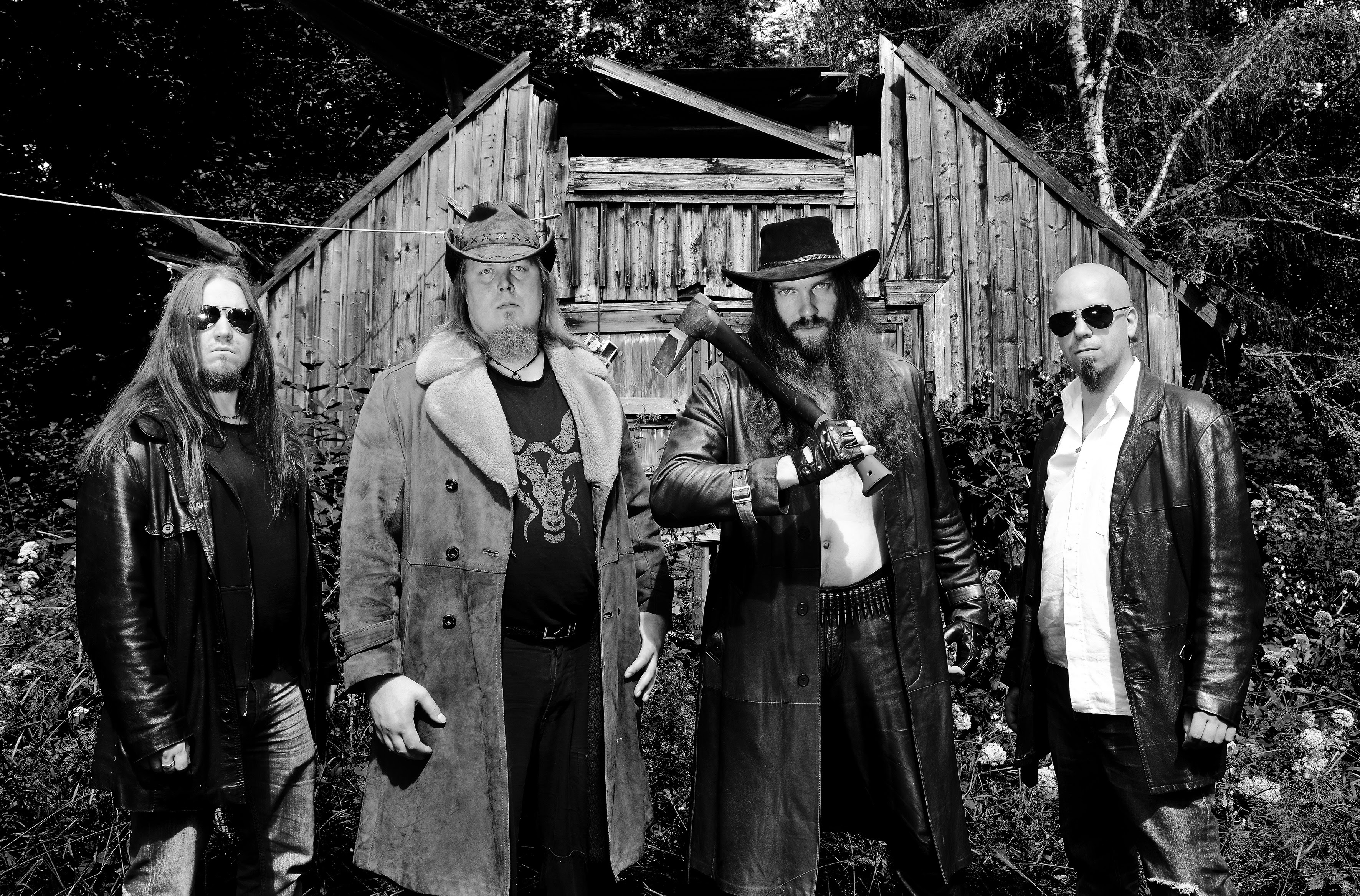 In the world of KUOLEMAN GALLERIA there is no place for faith and hope arises briefly when you are scratching the last wet match desperately with your numb hands to a matchbox cover only to feel warm for a second. KUOLEMAN GALLERIA creates the music unconditionally and do not bow to any direction. The music could be labeled as kind of black'n'roll that takes form in groovy songs not forgetting the madness lurking on the back.

KUOLEMAN GALLERIA was born in 2012 as a one man project and the drummer joined the band in 2013  when the first recordings were launched. In 2014 the guitarists completed the band's line-up. Soon after  that KUOLEMAN GALLERIA locked themselves up in a studio in late 2014 and early 2015 to create an album  that was later named after the first song on the album called "Kärsimys Kunniaan". 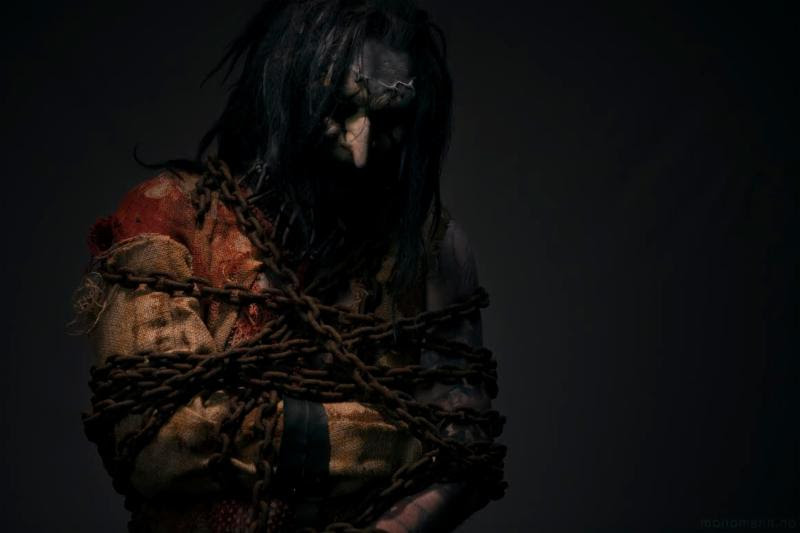 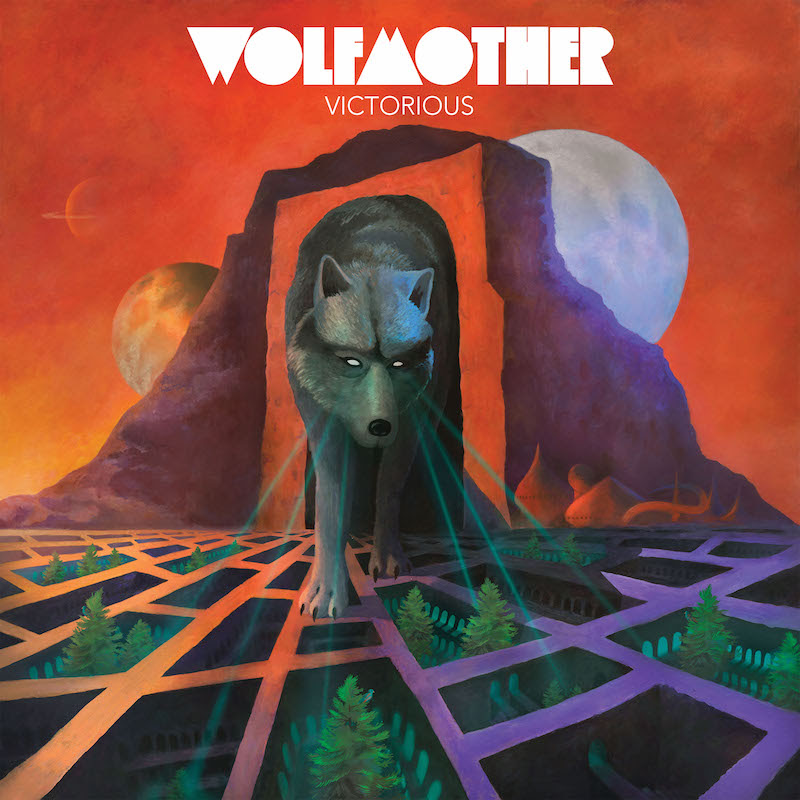 "My guitar is not a thing. It is an extension of myself. It is who I am." - Joan Jett 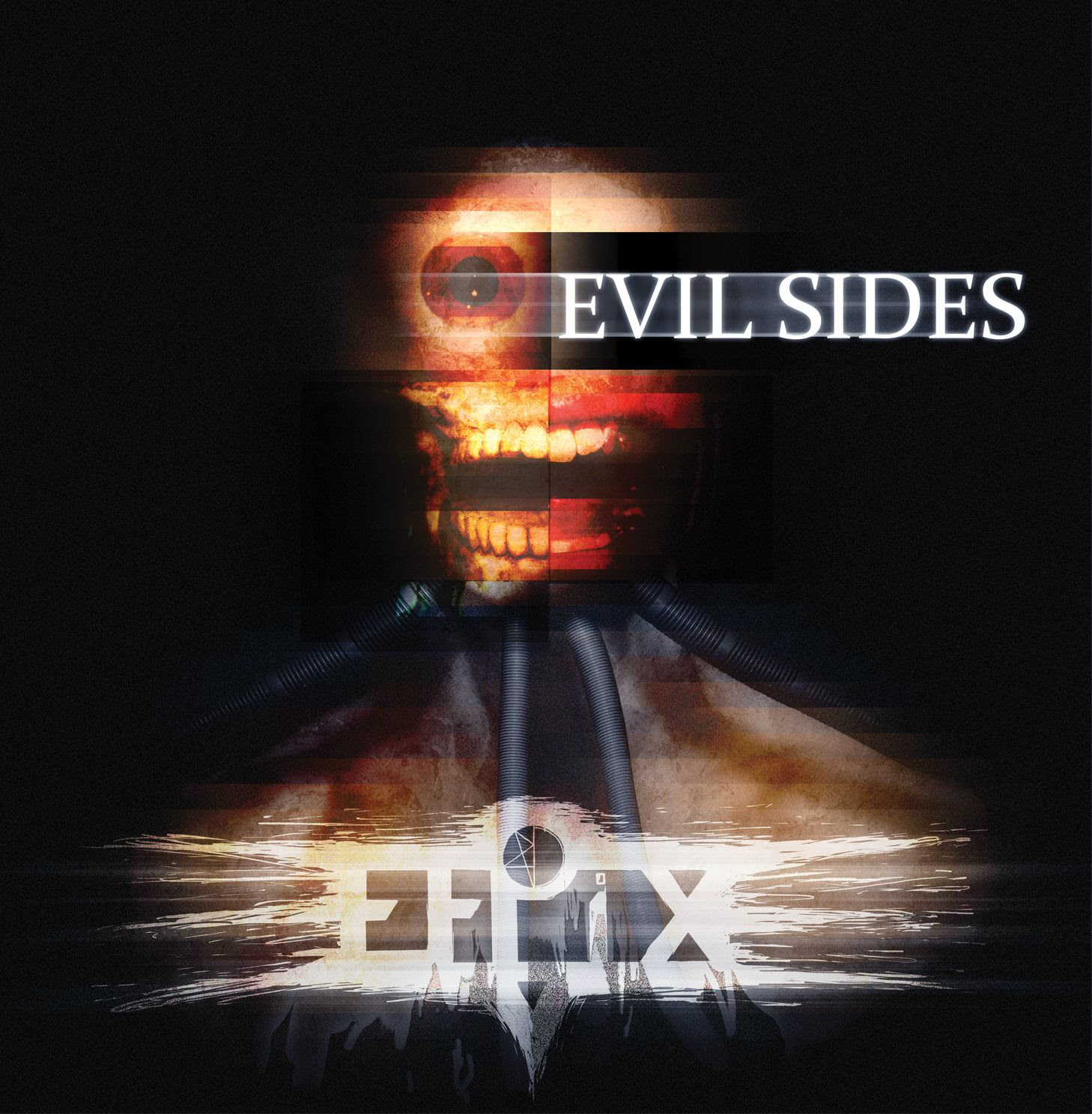 THE ORDER OF ISRAFEL unleash their second album via Napalm Records 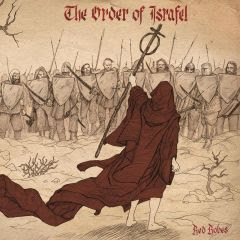 Doom metal proudly wears the most sinful color of all when these Swedes THE ORDER OF ISRAFEL unleash their second studio album The Red Robes!

The four-piece has firmly established its very own brand of slow-motion goodness in 2016: folk and the NWOBHM play a big role in the THE ORDER OF ISRAFEL cosmos. The result is a wondrous, mystical piece of art featuring unforgettable vocals and ten-ton riffing that will haunt you for aeons!

The Red Robes is set to be released on May 27th via Napalm Records and will be available as 6 page digipack with bonus DVD, as well as 2LP Gatefold edition with bonus DVD.
The track listing reads as follows:
1. Staff In The Sand
2. The Red Robes
3. In Thrall To The Sorceress
4. Swords To The Sky
5. Von Sturmer
6. Fallen Children
7. A Shadow In The Hills
8. The Thirst

Bonus DVD: Live At Sweden Rock Festival 2015
1. The Noctuus
2. The earth will deliver what heaven desires
3. On black wings, a demon
4. Promises made to the earth
5. Wisdom/Morning sun (Satanas)

The track "Agliptian Codex Cyborgization" is now exclusively streaming via Stereogum.com at the link below:

Artwork and tracklist of 'Krighsu' can both be viewed below. The cover has been designed by vocalist Phlegeton: www.phlegeton-art.com 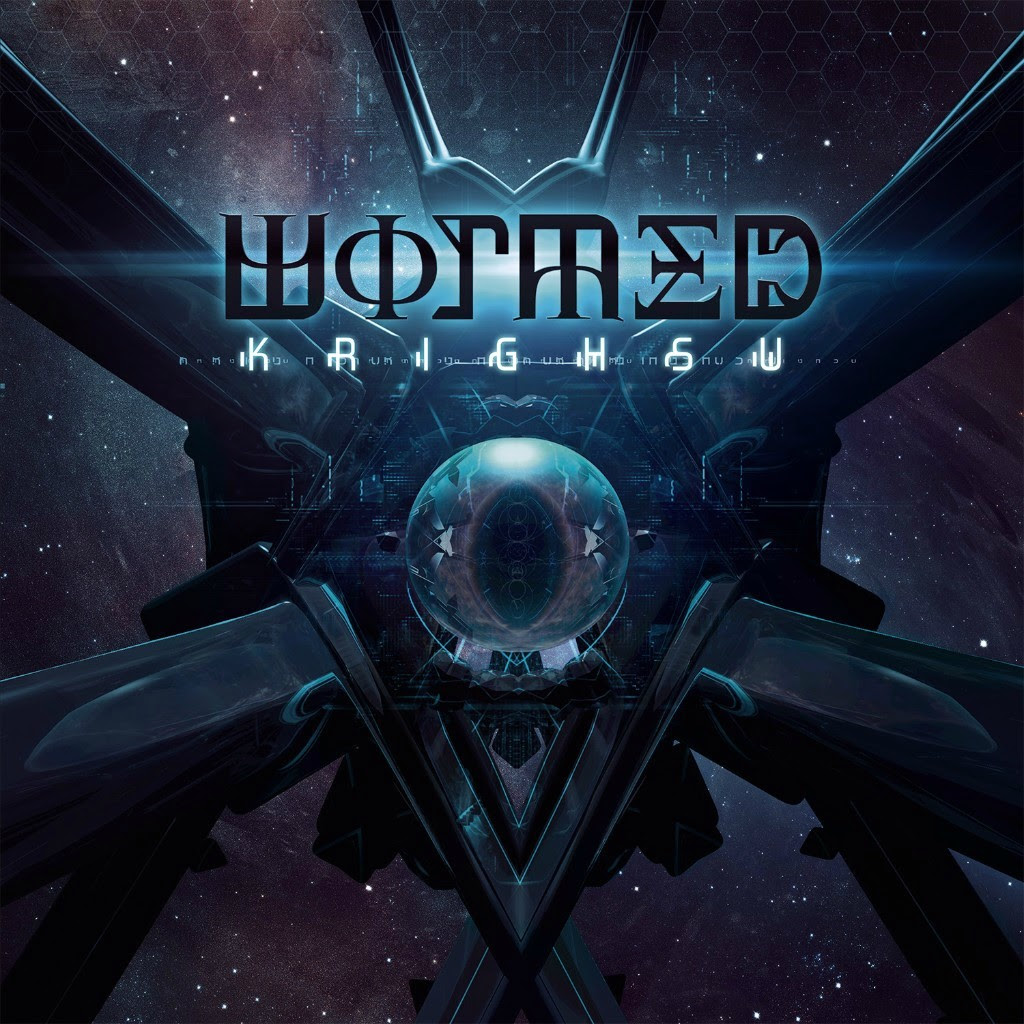 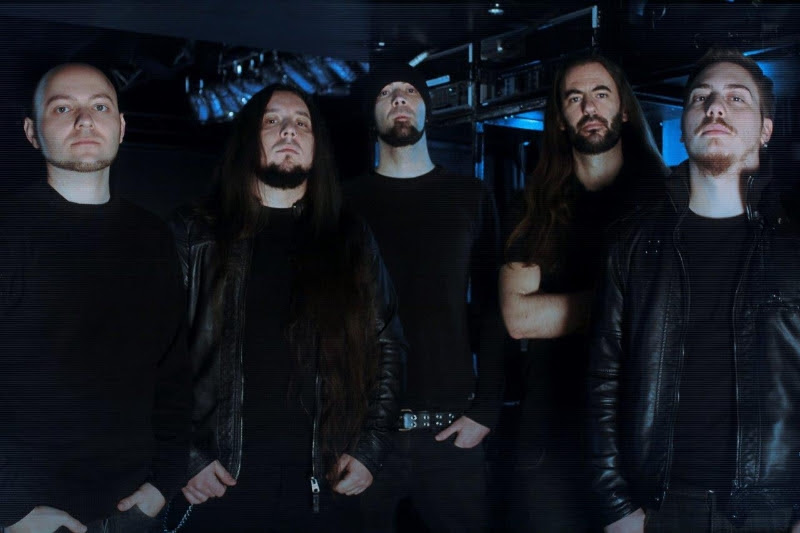 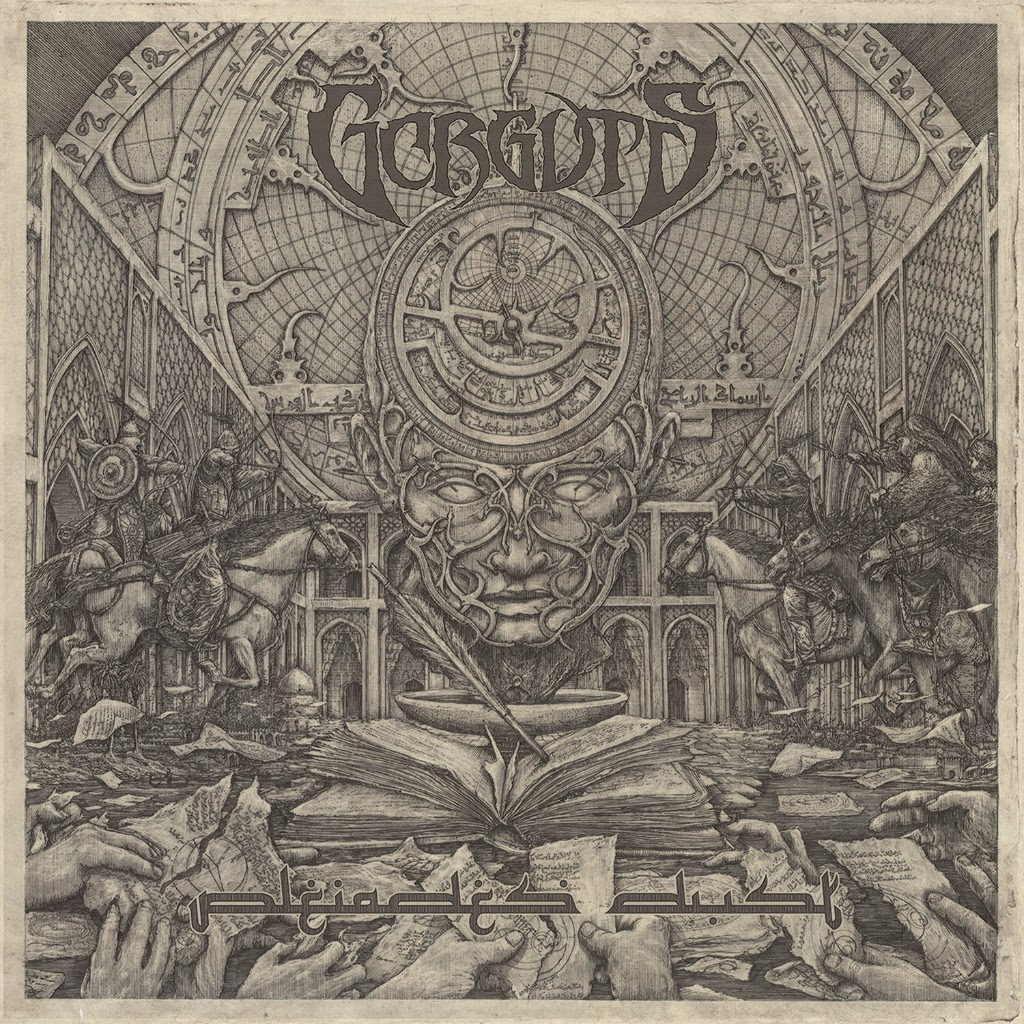 Canada's long-running and much loved craftsmen of technical death metal are returning with a 33-minute song. Entitled 'Pleiades' Dust' this complex, image evoking, and masterly arranged eponymous track fills an entire EP, which has been slated for release on May 13th. GORGUTS are now exclusively streaming part II of the song, called "Wandering Times". You can listen to it at the link below:

Mastermind Luc Lemay comments: "As our EP 'Pleiades’ Dust' consists out of a single long narrative composition, it was not written with the intention of being edited in segments. As the storyline proceeds in chapters though, I was able to isolate this part called 'Wandering Times' which will give the listener a good idea of the composition aesthetics which are present throughout the whole piece. The lyrics tell the story of the 'House of Wisdom', which is referring to a library that was based in Baghdad sometime between the 8th and the 13th century. There much of the intellectual activity of the Middle Age took place while Europe was stuck in the Dark ages after the fall of Rome. Many scientific discoveries were made at the time such as algebra, optics, astronomy, and many more... Without the translation movement that brought this library to life, we would have never had the Renaissance that we know. It is a story about curiosity, beautiful minds and sadly, about how man destroys great discoveries and achievements."

Cover artist Zbigniew M. Bielak adds: "As a child I was fascinated by the Middle East. My uncle used to work on civil engineering contracts in Libya and Iraq, so we kept receiving exotic, mosque-graced postcards throughout the otherwise lacklustre eighties behind the Iron Curtain. I have a genuine affection towards the region’s architecture, climate and aesthetics, therefore it was a pleasure to illustrate Luc Lemay’s new concept album, which is a tribute to the scientific heritage of the Islamic Golden Age. Although the pun of the album title was not intended – as much as NASA supercomputer Pleiades today, Baghdad’s Bayt al-Hikma – The House of Wisdom, epitomized the Middle East’s scientific sophistication. Boasting the largest library of the medieval world, this vibrant multicultural research and educational centre, drew in learned scholars including those of Jewish, Christian or Buddhist origin to translate, preserve and further develop important works of scholarship from across Europe and the Middle East whilst the Occident regressed into Dark Ages. Spanning from the 8th century of our calendar to its symbolic ending with Genghis Khan's grandson’s bloody Siege of Baghdad in 1258, resulting in obliteration of the House of Wisdom, The Golden Age of Islam left the world much indebted also to its numerous original contributions in diverse fields. From astronomy and medicine, to humanities and mathematics, Islam's heritage helped pave the way for the rise of the West to its present prominence. The mind-bending intricacy of  GORGUTS' aural landscapes portrayed in this single, over thirty minutes long piece of almost classically structured music, lends an aptly dramatic narrative to the story of a leading civilisation abruptly returned to dust." 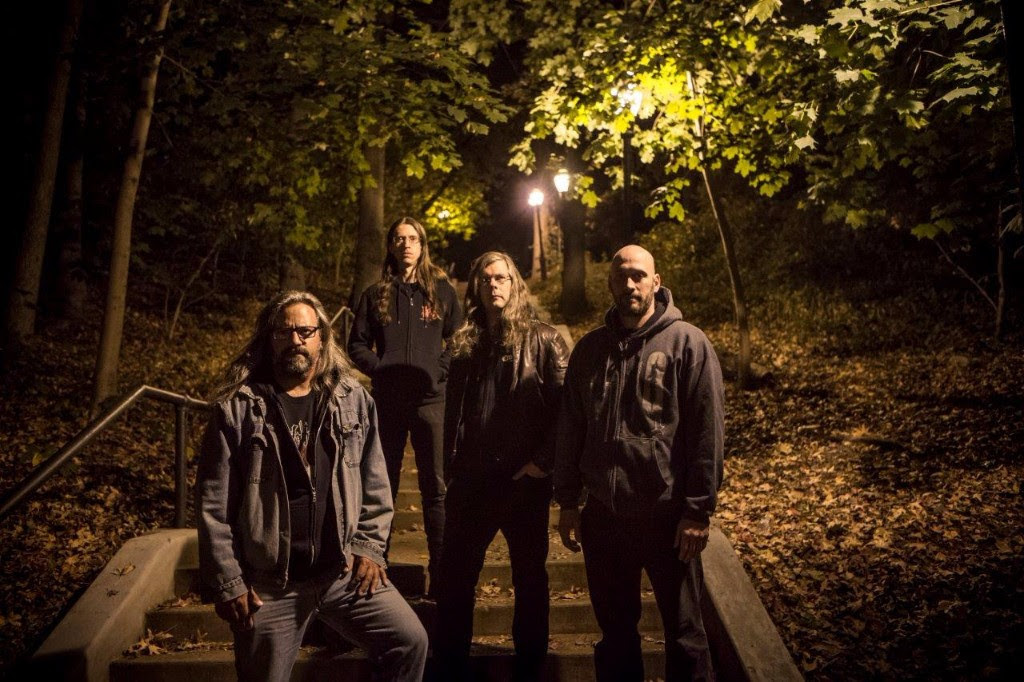 GORGUTS are furthermore revealing the artwork of 'Pleiades' Dust', which  was created by renowned Polish artist Zbigniew M. Bielak (MAYHEM, ZHRINE, GHOST). It can be viewed together with the tracklist (we actually have humour) below.

When it comes to GORGUTS, you have to expect the unexpected. In an age of a postulated clash of cultures, mastermind Luc Lemay delivers a piece of music that is conceptually and lyrically based on the "House of Wisdom", a medieval library based in Baghdad and at the heart of the Golden Age of Islam with its many scientific breakthroughs in various fields of learning. As Luc comments: "It is a story about curiosity, beautiful minds and sadly, about how man destroys great discoveries and achievements." Musically there is more narrative feeling as each section is introduced in such a way that every riff has the space to evolve like a character in a story.

Few extreme bands can boast the pedigree of GORGUTS. During their early days as part of death metal's first wave, they created a legacy of legendary releases including their debut album 'Considered Dead' (1991) and its more experimental and technical follow-up 'Erosion of Sanity' (1993). After a hiatus of five years, Luc Lemay returned with a new line-up, which released the highly acclaimed and seminal third full-length 'Obscura' (1998). By then GORGUTS had been busy at expanding and redefining the language of death metal. With a new line-up that left Lemay as the sole original member, the next milestone album was released under the title 'From Wisdom to Hate' (2001).

Yet again the band went into hibernation, while their musical legacy continued to inspire and thrive as their native Quebec became a focus for technical death metal with acts such as CRYPTOPSY, NEURAXIS, and BEYOND CREATION to name but a few following in their footsteps. After more than a decade of silence, mastermind Luc Lemay unleashed 'Colored Sands' (2013) with an all-star line-up including Colin Marston (BEHOLD THE ARCTOPUS), Kevin Hufnagel (DYSRHYTHMIA), and John Longstreath (ORIGIN, SKINLESS), who has in the meantime been replaced by Patrice Hamelin (QUO VADIS, BENEATH THE MASSACRE).

Now GORGUTS return with their most experimental song so far that combines all their virtues into one massive masterpiece. Lean back and listen carefully!

Season of Mist is proud to announce the signing of RIVER BLACK.

RIVER BLACK is an emotional reaction; an answer to the call of today's heavy music. It is a creative process that journeys to the heart and soul; purging all the good, the bad and the ugly along the way. 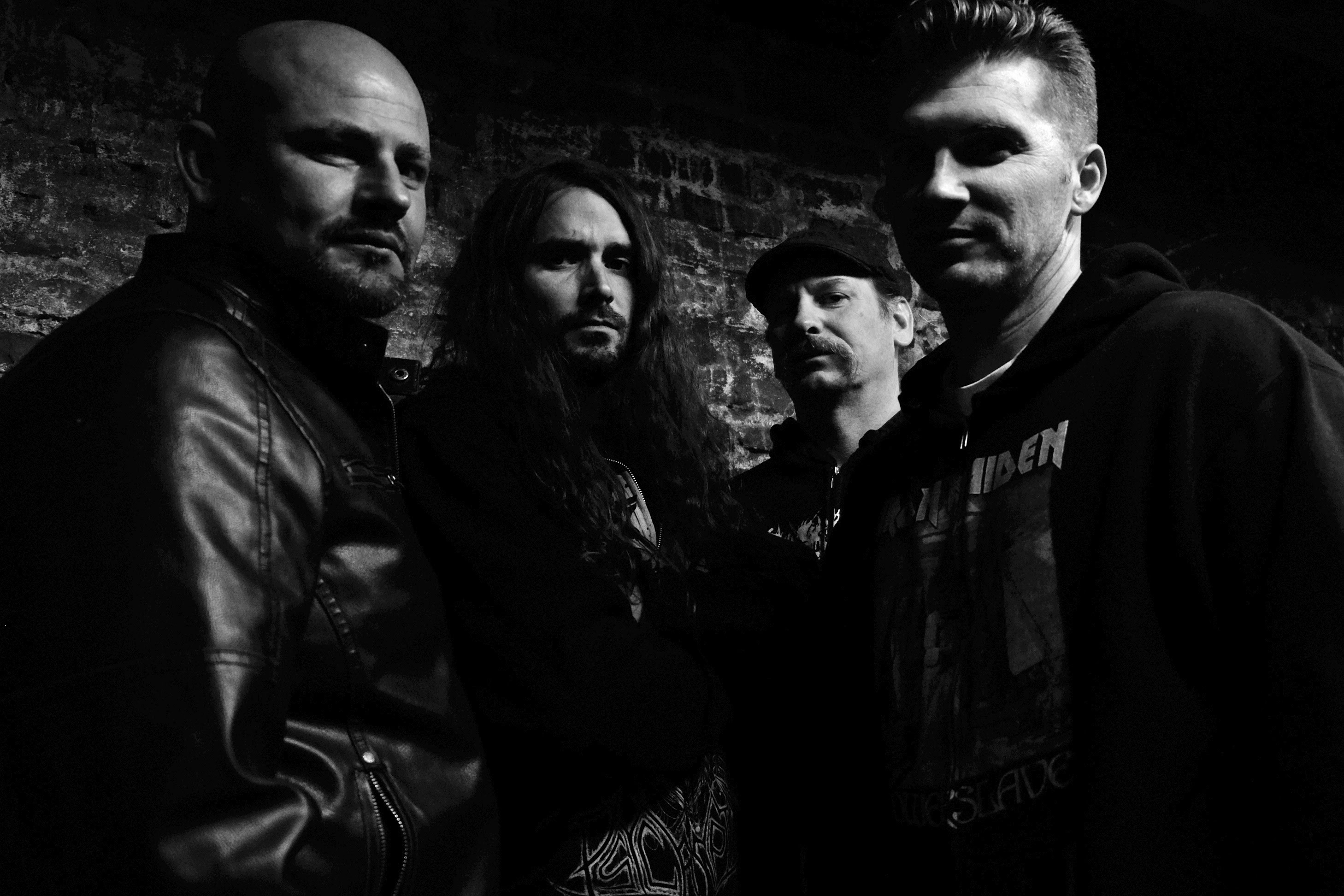 RIVER BLACK was formed by Adubato and Witte after the dissolution of BURNT BY THE SUN . The duo felt the need to keep the spirit and energy behind that going, pushing it a darker and heavier direction than anything in their collective past,and enlisted long-time friend Bamberger. After working through a few different line-ups, the trio brought Olender into the fold. Witte explains, "I've always had a strong connection with John and his riffs. Somehow, he's able to pull things out of me drumming-wise that no one else can. I found a rhythm partner and brother in Brett over the years, so those two together are the ultimate wing men for me so-to-speak. Adding Mike back into the fold was the puzzle piece that had been missing the whole time we've been working on this project."

THE UNGUIDED - Lust and Loathing review 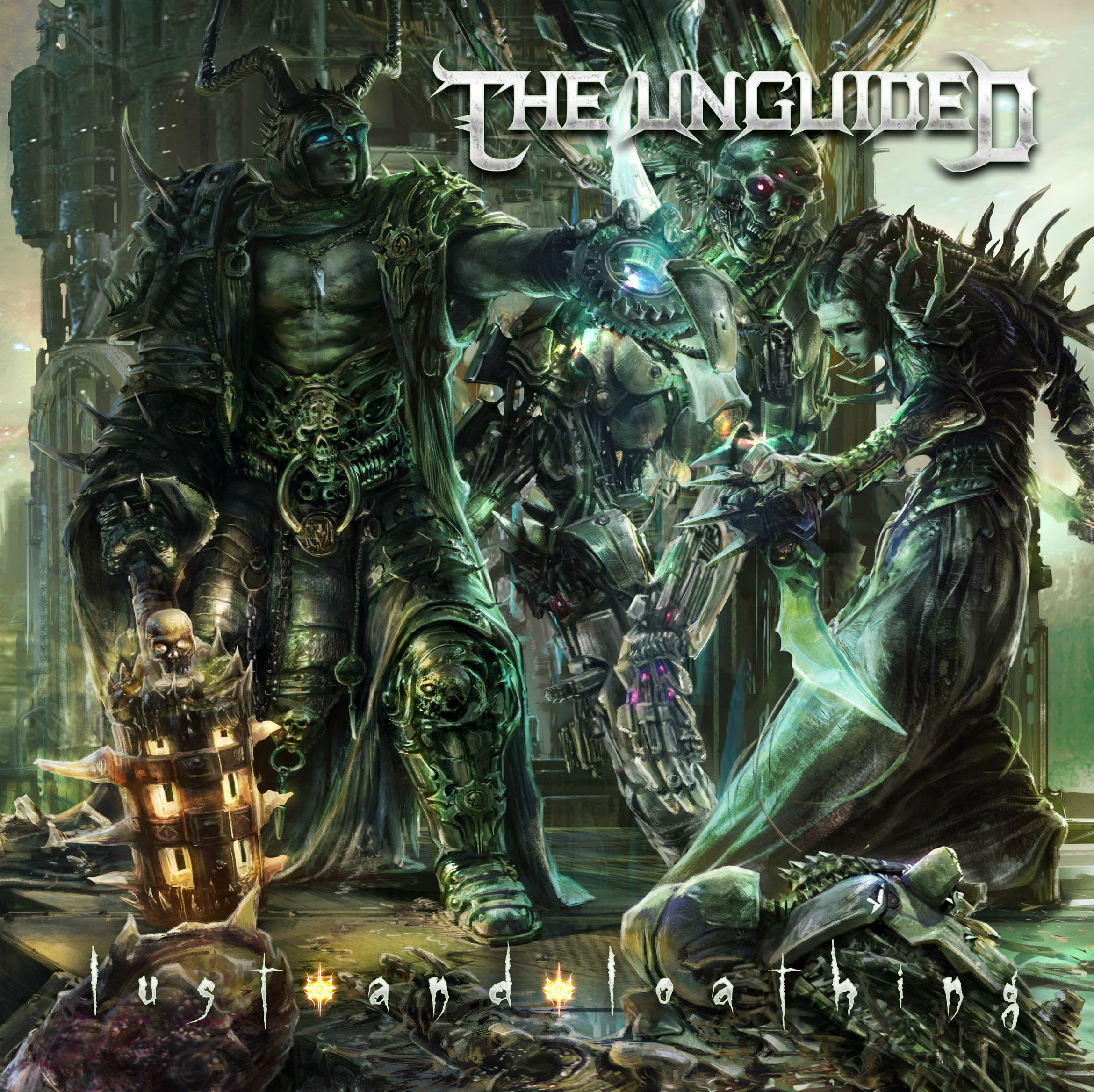 THE HYPOTHESIS JUST RELEASED THEIR SECOND SINGLE IN SPOTIFY 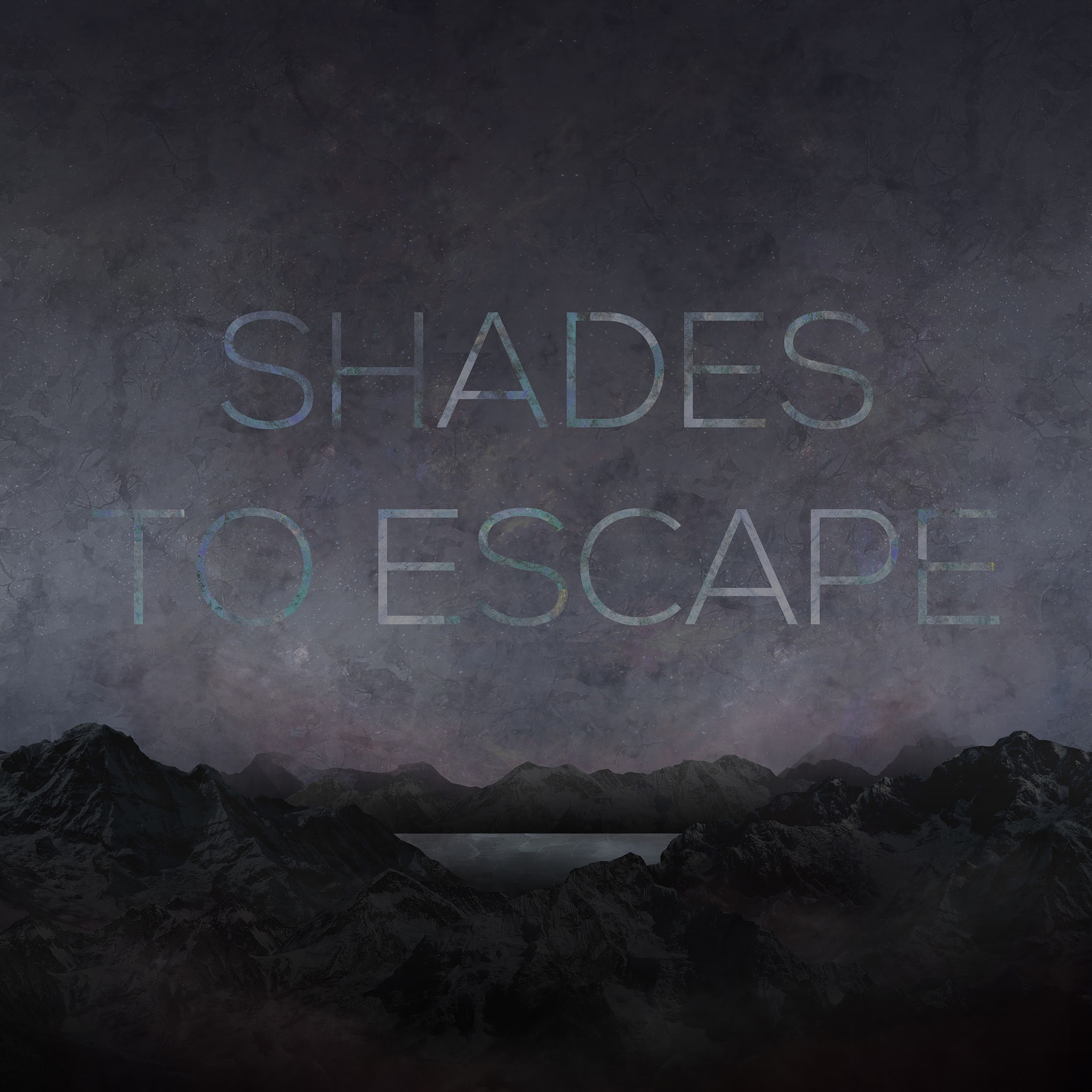 THE HYPOTHESIS, a Finnish band playing modern metal, has released their second single called ”Shades to Escape”.  Single is now available in Spotify and other streaming services. The Hypothesis has made a label deal with Inverse Records and the upcoming  album ”Origin” will be released 5th May 2016.

New song ”SHADES TO ESCAPE” is released in Spotify:

Previous single ”EYE FOR AN EYE”

BLACK SLEEP - The Whales of the Grey Sea Review

"The Whales of the Grey Sea" 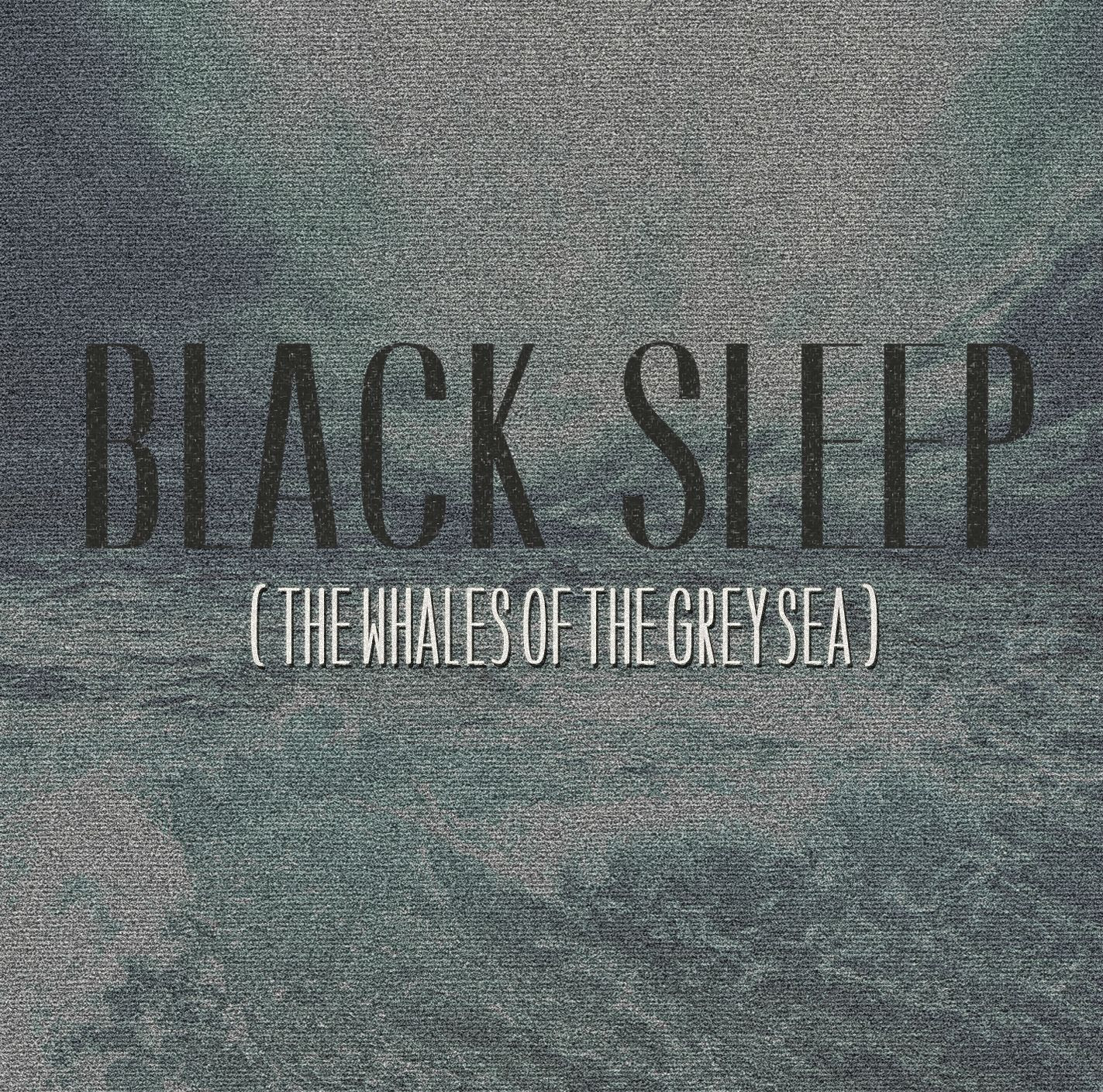 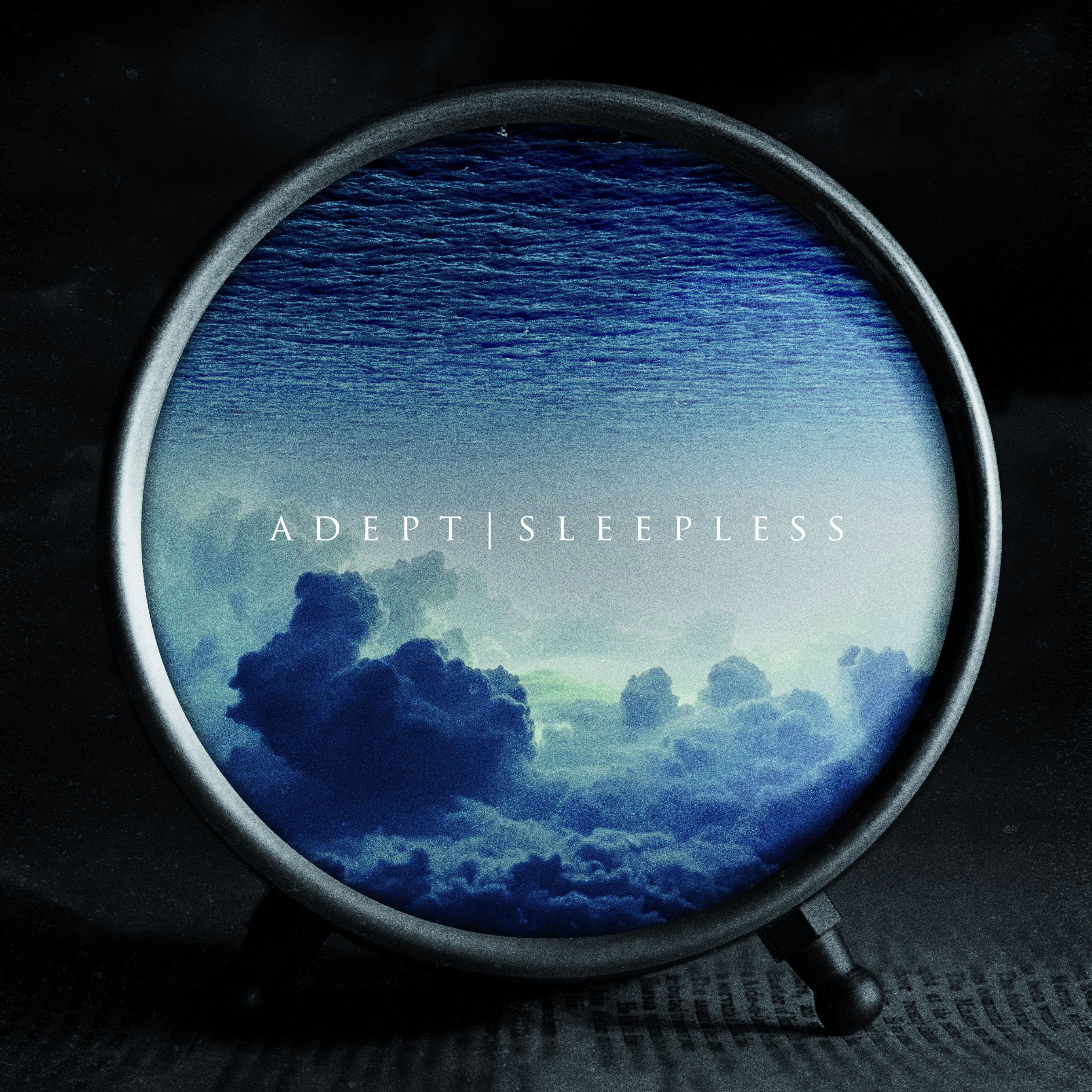 Track List:
Black Veins
Wounds
Dark Clouds
Carry the Weight
Rewind the Tape
Down and Out
The Choirs of Absolution
Lights
The Sickness
Sleepless