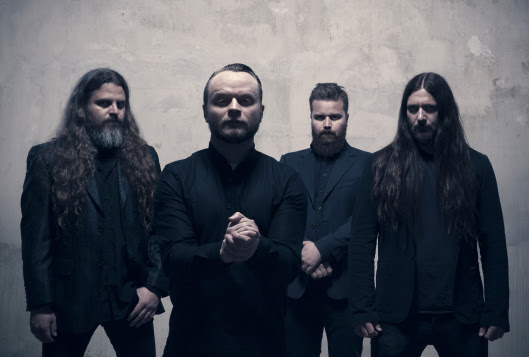 The heavy rock powerhouse Sahg are releasing their new album «Memento Mori» via Indie Recordings.
The band gave us this interesting interview, Enjoy!

LFdM: Hello and thank you for this interview. When I received the song I could not resist the temptation to chat with you about the new album.
Sahg: Thank you for the opportunity to talk about our music!

LFdM: Is this the return of the occult Norwegian rock gods? How do you see it?
S: Sahg never went away. Sahg is still alive after more than 10 years of brilliant music, fantastic tours and shows around the globe, and with an exclusive and loyal fanbase! Now the fifth musical offering to the world is on our door step. Sahg is stronger than ever, and vital to all four present members. I don’t see this as a return, more as a contiuance of the ever exploring and evolving nature of Sahg. I have followed Sahg since the very beginning, and as a friend throughout the bands career I am very proud to be able to contribute to the Sahg  history with such a strong album that MEMENTO MORI has become. I’m not sure I would classify Sahg as the occult Norwegian rock gods, but it ultimately sounds pretty cool!
LFdM: I have listened carefully to Silence The Machines first and then to the whole album: it seems to me that this album is less constructed in the studio, more visceral then the previous ones. What can you tell us about that?
S: MEMENTO MORI was more or less half-written when I joined the band in the spring of 2015. At least there was an idea of an album, and a lot of demos was being brought to the table. Olav Iversen, our main songwriter and lead vocalist/guitarist, was very productive and the music almost poured out of him as the band was being put together again after two members had left the group. One founding member, and their drummer for the past two albums. It was impressive to witness the outburst of song-writing-enthusiasm from the remaining two as Ole (guitars) and I struggled to get comfortable as the new guys. But for me at least, it felt really important to give honest feedback on the demos being presented. I spent a lot of time with the new music, looking for the parts and sections of music that had the right feel to me – not only as a drummer, but also as a fan and one with huge interest in music. Maybe the extreme circumstances lead to a more intuitive record in the end. We were all learning to play with eachother, and there was not much time to really sit down and try to write another concept album. And none o fus wanted that either. We wanted to write something crushingly heavy but at the same time endorse the progressive elements that Sahg has managed to put into the music so well in the past.

LFdM: You draw your inspiration from anything that has a dark fascination. If you were to put aside literature or cinema, what could inspire your creativity in the future?
S: Well, creativity is in everything, so everything could theoretically inspire the future music from Sahg. I also believe that in all definitions of creation there are dark sides to which man will draw his fascination. But to be more specific, I would presume our ever changing global situation feeds our political minds and force our cultural conciuosness to adapt – or reject. For example; In the West you see a collective frustration with the unattendable crisis in the Middle East. Nothing new, really, but it is very visible in the media today. 30 years ago it seems that the dark music from Norway was mostly inspired by fiction from J.R.Tolkien, but somewhere along the road the young boys turned to men and found that the real World is more ”true”, ”cult” and scary than dragons and wizzards in books. This suits me just fine.

LFdM: Numerous influences are attributed to you: they always end up detracting from the work. In Memento Mori we find the artistic ability to capture an emotion more than the atmosphere, the emotion that ensues from it, as if the music had a lesser importance than the final result. Is it necessary to shred your soul to achive this?
S: In some ways yes, we tried more to capture the true spirit of the band, than to create it. I think some of this comes from the fact that the entire album is recorded live in studio. With this album it felt important to be able to record the new line up with the attributes of each member, old and new. And we had a collective goal to make it sound more aggressive, put more feelings into each stroke and every chord, more than just enough to produce a ”perfect” musical achievement. You have to drag your body and mind through emotions to create the right atmosphere. From this comes music. Music that feels right. Music that sounds honest and heartfelt.

LFdM: What is the craziest thing we see today linked to the occult?
S: The radicalisation of young men and women, the destruction of historical cultural heritage in some of the oldest parts of our civilisations crypt I find occult. To neglect and cover up something, to mislead your children and create false deitys to establish a new welth incontent with modern fellowship. This disgust me to the very core. Spiritual warfare is very dangerous, and disrespectful.

LFdM: The religion, and I speak not only of Christianity, bases its doctrine on the "temptation" that comes from dark or evil forces: it depends on your point of view and on the ability (or not) of people to resist. What is a temptation for you? And how it can be linked to the music?
One of my favorite ”deeds” are greed. It is ever present, and we all suffer from the temptations of greed. We all want something we don’t need, and it can easily transcribe into quite vulgure yet reckognisable lyrics to most. When greed leads to death it is at it most beautiful, because you then have two extremes that leads to nothing. And what does it matter anyway? Remember, you must die, eventually.